A sacred and historical tour along the Adige, Brenta and Sile rivers. Discover the churches, pilgrim hostels, castles and monasteries that dot this remarkably beautiful and evocative landscape.

The 700th anniversary of Saint Henry of Treviso, an event commemorated by the Diocese of Treviso, inspired a route of pilgrimage in his honour.

In a guidebook, Paolo Spolaore chronicles the historical context of Saint Henry’s life, tracking his most likely route from Bolzano to Treviso. Spolaore goes on to describe the sites of historical interest and “basic” hostels along the way, including useful suggestions for pilgrims.

The path winds along some important routes, mostly rivers:

Saint Henry of Treviso’s Way appeals to a growing number of visitors who want to experience a pilgrimage walk to a holy place, as well as locals who do not necessarily want to travel as far afield as Santiago, Rome or the Holy Lands.

This helpful guidebook is an invaluable resource for anyone who wishes to explore a fascinating “new” route along rediscovered ancient paths, as they journey to discover their inner selves or work towards specific spiritual goals. Pilgrims – particularly Germans – have crossed these routes through the Treviso and Veneto regions on their way to and from major pilgrimage sites.

GPS tracking of the different sections is a useful tool to help you find your way along this sacred and historical route. Access the GPS on compagniasantiagobeatoenrico.it/il-cammino-del-beato-enrico-da-bolzano/ (available in Italian only). This long route connects sections of shared walking and cycle paths or existing trails, allowing pilgrims to travel safely and easily from the Alps to Saint Henry’s tomb in Treviso, and then all the way to the Venetian Lagoon, with a brief detour to Padua, known for its extraordinary religious heritage.

The guidebook is available in Italian. You can find it at the Giuseppe Toniolo hostel and San Paolo bookshop in Treviso, as well as the major bookshops in the city of Treviso, Castelfranco, Montebelluna and Bassano. It is distributed by the publisher Antiga (Crocetta del Montello): tel. 0423 6388 – editoria@graficheantiga.it 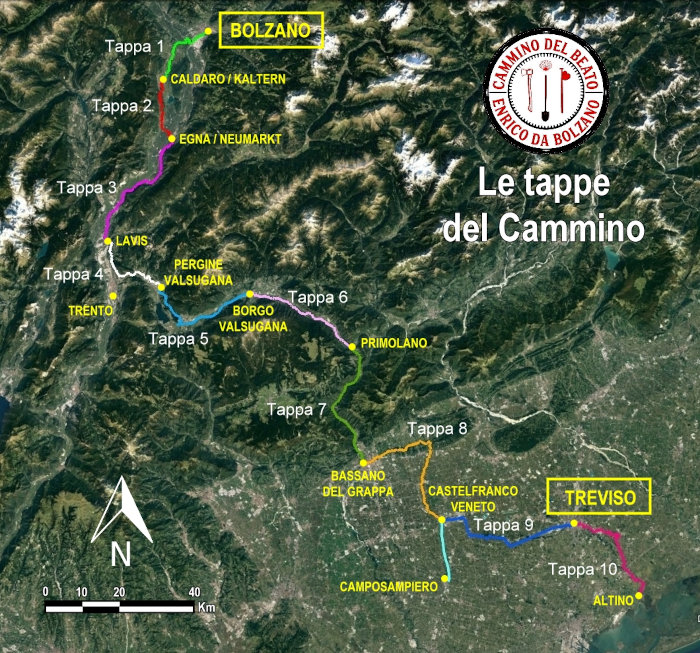